The assignment comes from the first prize in a competition of ideas organized in 2005. In the center, in front of the bridge of San Anton in Bilbao la Vieja, just where the Camino de Santiago doubled. The optimism in architecture comes, sometimes, from feeling very fortunate for the opportunities you had. This was one of them. The possibility of designing the two facades facing a newly created street in the old town, to decide volumes, cornices and propose how that street, extremely inclined, is offered as an extension to the historic bridge of San Anton, was a successful challenge; a project divided into two and anchored on its back by the geometric complexity of the dividing walls of several existing buildings.

The two pieces object of the competition have a relationship of asymmetrical and non-mimetic reference. They invent the city and sculpt the street. The strong slope of the street between blocks facilitates the location and access to garages and comercial, coated in prefab concrete. The decision on how far the red alignment arrives and where the recessed tile volumes begin, which have vocation of disappearing into the gray days of the capital, was a decision to scale. The gray volumes, which have been changing throughout the process, had something of temporary construction suspended at any given time. The cornice offsets answer from one part of the slopes, but they also remind us about the division of property in the historic centers.

The attiscs are an expressive opportunity, while the structure and rhythm of the entire facade of red precast is timeless, flexible. We have always thought that these facades that explain the kitchens because of their clotheslines and the living rooms because of the terraces, are less able to favor changes and adaptations tahn those which suggest a lack of differentiation of the outer perimeter and a peripheral arrangement of the common elements: the box versus case that Paricio speaks about.

Guessing the color and textures of the facades right became an obsession; the success of the project and its future dialogue with the neighborhood and pre-existing buildings depended on it. The red-orange color brick of some more than a century old nearby public buildings did prolong the process of trial and error until the day before the ultimatum necessary to meet deadlines. Prefabricated red dye to saturation, dusting oxide powder before concreting and striped rubber mold as background. Color fixation. Striped gums alternate (vertical-horizontal) seeking, when the different lights of Bilbao, at different times, impinge on them, an effect of changing facade, always different. Precast gray sandblasted sockets and anti-graffiti paint that slightly changes its color, brightness gray tile facades and roofs of attics, adhering and grouting mortar with latex-based plasticizers. 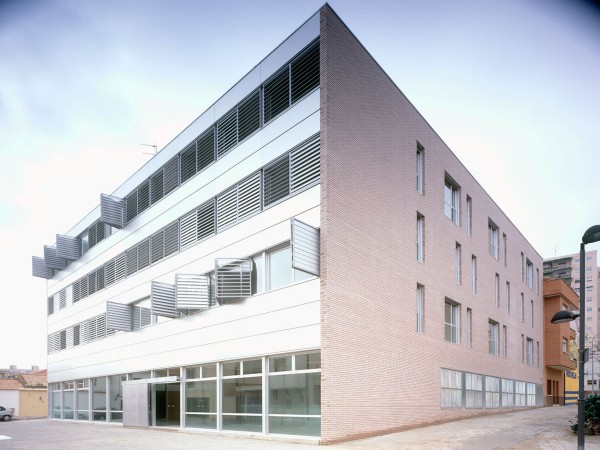 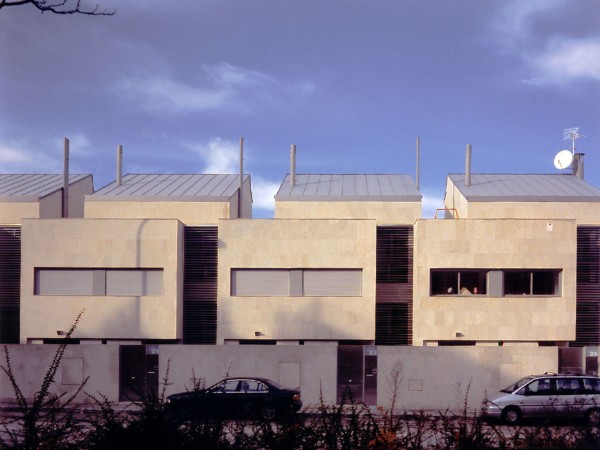