After the initial happiness from winning the competition, we felt a bittersweet flavour when we knew that the City Council and the regional government had just a million euros to build the building. Again the challenge was to give more for less, we were forced to make true the motto proposal for the contest, 'hangar', building this multifunction piece with concrete, austere, like a cathedral or a hangar. We imagined, as it has been finally done, that time would make flowers blossom and grow green on the concrete and granite. The project developed the ideas of the competition, making them consistent with the physical reality of the site: the Eimonde pools, a place where the uniform and constant water table is 2 m below the ground floor and that circumstance conditioned the structure of the building, with a foundation of slabs almost submerged.

The building is divided in two parts. First, the hangar, made by concrete (walls, roof, indoor ....) outside and holding the Multifunction room with capacity for 400 people and finished by intense red colour chestnut wood inside. And a second piece perpendicular to it in granite, with classrooms and other facilities. Both parts comprise an outer space, a space designed for different activities, basketball, “pulpadas”, summer cinema, festivals, some of them dreamt seeing Visconti.

In the Multifunction Room, the main entrance is under the large free cantilever of the window-advertisement while inside the retractable bleachers, like a heartbeat effect, are extended or collected to allow new activities. To the road, the pieces of granite that form the fence were preserved and protected during the work as found treasures. 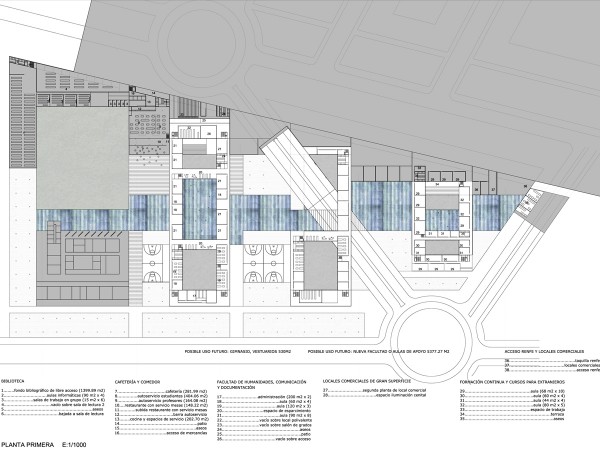