The complexes where intellectually handicapped live, work and deal with daily matters, were placed at a safe distance from urban centers a few years ago. There they were attendded, were concentrated and the city did not need to see them.

The architecture of these centers, which we find on the outskirts of Burgos, seemed designed by a military engineer, who perhaps was a president of the parents association one day. Brick gabled ships, brick barracks ...

Expanding the current building of the Special Employment Centre. Those in charge let us rethink what they had decided a priori; Now, the entrance, offices, toilets, dining room, would fall behind, even at the expense of having to make a new access road, separating the entry of people and goods, which would continue happening in the west.

The shed of brick with double bay, gable roof, would be extended, ruthlessly and without deceit, by attaching a new piece, this time without pillars. A 30-meter truss arming the skylight of the intersection and from which triangular trusses hung was bolted to the same corrugated sheet, painted in blue, looking at the blue days, confused with a sky that we see on the opposite side through glass without woodwork. Standard continuous fluorescent, reveal the hidden structure. In the access parts, the door is rotated looking south and the exact same structural inverted truss argument is used, this time covered with duplex ladur, like ribs of a whale.

The different materials used in each piece, and their clear and recognizable forms, wanted to be an unstoppable virus that infected the monotony of the rest of the complex. Construction box sets in a garden. 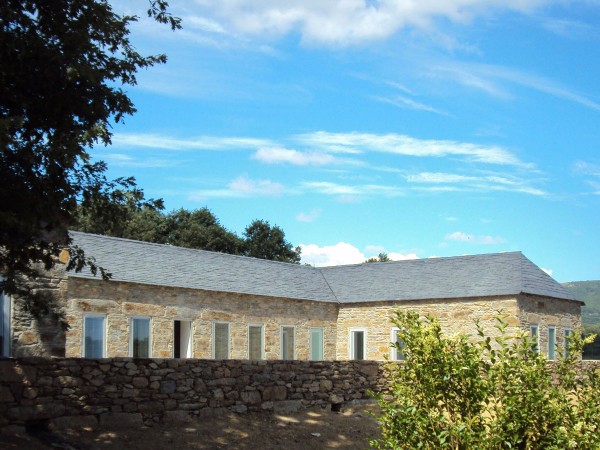