In "El Soto" We had to reinvent the commision.

Initially, the task was to develop a basic project, already approved by the City to renew an existing Cultural Centre, which had a focus of activity and tradition in the neighborhood. The challenge was to get as much as possible, with a very limited budget in times of austerity, and with the premise of preserving the existing building.

Constant dialogue with the various representatives of the City Council and participation has made exemplary acceptance and involvement of each of them with the Centre from the beginning.

Covering the existing building, and using the preexisting foundation and structure, the transformation begins from there:

The old white brick facade is dressed up with an industrial metal, disappearing into the gray sky and also camouflaged with the existing painted cover.

A skylight pyramid of polycarbonate in the heart of the building to shed light on the hall disappears and appears as a surprising northern light entrance when entering the exhibition.

The existing theater (an Italian-type room with fixed seats, as other dozen standing in Mostoles) becomes a multi-scenic avant-garde room that allows for the assembly of an experimental space where the stage can be anywhere in the room, and where retractable bleacher-seats are collected and disappear if requested, leaving an open room.

Finally, three new pieces of black brick (with a lock that makes it appear as something else) hold the extension of the library, cafeteria and theater storage. These pieces face the street creating a new public space.

In addition to a brand new building, Mostoles has this new small yellow paved square, which connects the multi-scene theater to the external events and which leads from the street to the building entrance, flanked by a light plane and the velvet of the cafeteria. 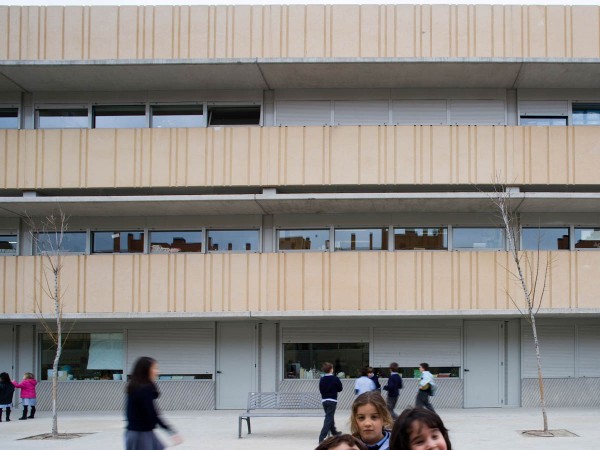